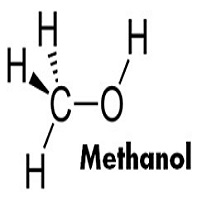 Methanol is an alcohol, consisting of a methyl group linked to a hydroxyl group. It is a light, volatile, colorless, flammable liquid with a distinctive odor similar to that of ethanol (drinking alcohol). Methanol – CH3OH – is four parts hydrogen, one part oxygen and one part carbon. Methanol can be produced from natural gas, coal and renewable sources such as municipal waste, biomass and recycled carbon dioxide.

With more than 20 million tons produced annually, it is used as a precursor to other commodity chemicals, including formaldehyde, acetic acid, methyl tert-butyl ether, as well as a host of more specialized chemicals.

It is used as antifreeze, solvent, fuel, and as a denaturant for ethanol. The chemical is also used to produce biodiesel via transesterification reaction. Because methanol has toxic properties, it is frequently used as a denaturant additive for ethanol manufactured for industrial purposes.